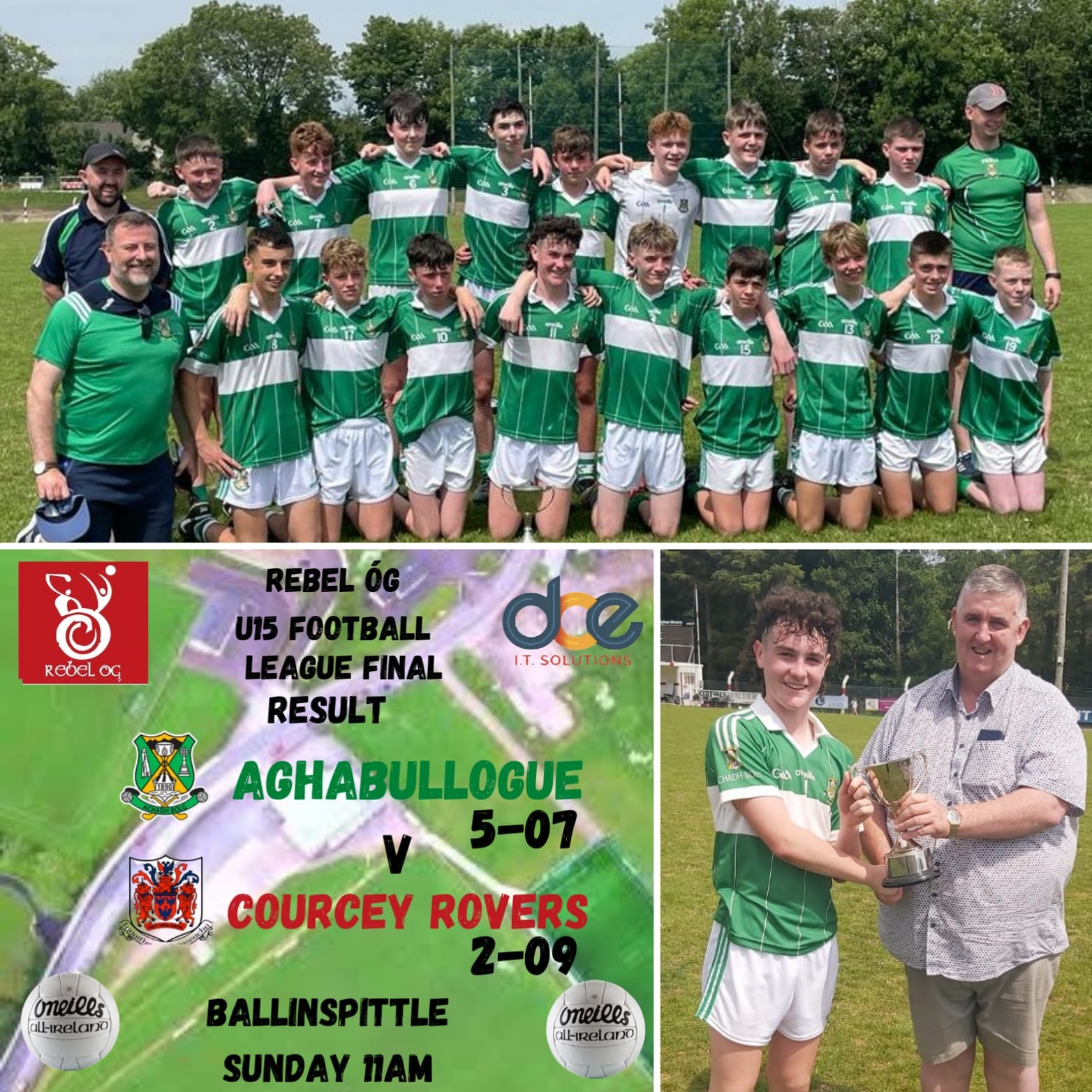 CHAMPIONS: A great second half performance saw our U15 Footballers bring home the first Silverware of the season as they beat Courcey Rovers in a sunny Ballinspittle this morning. What made it a more noteworthy win was the fact that they beat us in Coachford on Wednesday night.

As you'd expect in a final it was close,  with the teams level after the 1st quarter. 1-2 to 0-5, Joe Cooney with the goal for us. Courceys took over for the next quarter and helped by a strong breeze they pulled away to lead 2-9 to 1-2, but we responded well to get the last 2 scores of the half leaving us down by 2-9 to 1-4 at the break.

But we weren't to be beaten and a strong start, led brilliantly by captain Fergal Gillespie, with 2 goals and another by Sean O'Sullivan we came back into it and went into a 2 point lead.

From here the drama unfolded. Courceys got a penalty and it was brilliantly saved by Patrick How and he also bravely saved the follow up. Things went to and fro and we looked to have it won when Pierce O'Connell put over a great score to put 4 between the sides but back they came and won another penalty.

Again Patrick How was the hero with another superb double save.

That was the winning of it and it was fitting that we got the last score of the game when the impressive Joe Cooney goaled for the second time to leave the final score Aghabullogue 5-7 Courcey Rovers 2-9.

There were heroes all over the pitch. Patrick How was inspired in goal. The defence was superbly marshalled by senior players Cillian Rembourg,  Bradley O'Sullivan and helped with strong performances from Cathal Keating,  Fionn Driscoll and Kevin Cogan.

Midfielders David Foley and Kyle Lynch got though a mountain of work and were ably assisted by the hard working Joseph Foley.

Up front Captain Fergal Gillespie had a fine hour scoring 2-4, Sean O'Sullivan (1-2) and Joe Cooney (2-0) were a constant threat and Pierce O'Connell was excellent throughout.

The full team and panel were a credit to the club with Donnacha McGinn, Eoin Daly, Keegan Long, Jack Mangan and Andrew Lehane all contributing today and we can't forget Daniel O'Sulllivan and Mark Leahy who missed today but played a huge part in getting us there.

Well done to all involved!!