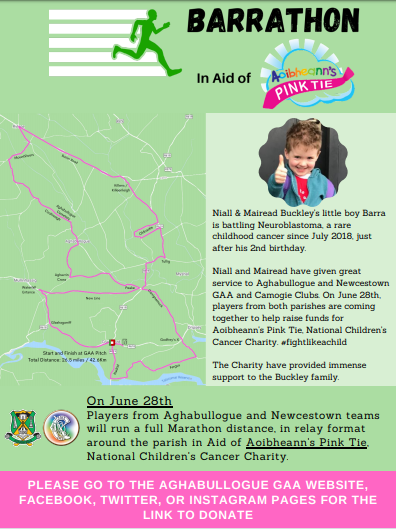 It’s a quiet time for GAA clubs. I think we all miss it, and not just the matches or training. It’s the post- match analysis in the clubhouse or banter when you win (or lose). It’s the camaraderie, friendship and sense of community. It’s family!!

Thursday night, late May, a club officer in Aghabullogue GAA got a call from the senior players. They had an idea and wanted to run it by him to see if the club would approve. A lot of clubs all over the country are having fundraisers for good causes. They had someone they wanted to support.

“Great idea, can’t see why not? What charity were you thinking of?”

“Aoibheann’s Pink Tie” was the reply.

It was July 2018 when Niall and Mairead Buckley got the news that parents dread. Their son was confirmed as having Neuroblastoma, a rare childhood cancer. Just after his second birthday, Barra Buckley was facing a serious fight. Their family rallied around them, supporting them in every way possible but it was a very difficult time. Trips to Dublin became part of their routine. Weeks spent in St. John’s ward in our Lady’s Hospital in Crumlin were the norm. GAA was a way to occasionally relieve the pressure, but up in Dublin 150 miles away from home, help came from an unexpected source.

Aoibheann’s Pink Tie was set up in 2010 by Mick Rochford and Jimmy Norman after the tragic loss of Jimmy’s daughter Aoibheann to cancer aged just 8 years. They give vital support to children suffering from cancer in Ireland and their families. The work they do puts smiles on children’s faces and was invaluable to the Buckley family. It was a favour that had to be returned and it would be by Niall, Mairead, Barra and Rua (Barra’s little brother).

As often happens in GAA clubs, things get done very quickly when the will is there. The request was made to the board and without a minute’s hesitation the full resources of Aghabullogue GAA and Camogie club was made available to support one of their own. A committee was formed with the football, hurling and camogie adult and juvenile boards all represented. Ideas flew backwards and forwards. Social distancing would mean that there were challenges, but nothing that a bit of smart thinking couldn’t overcome. How would we get lots of people involved but not have crowds?

And so “Barrathon” was born. “Barrathon” is a marathon with a difference. The players, whose idea it was, would run a relay in small groups around the parish. Word spread quickly. Old teammates, coaches and Juvenile teams that Niall Buckley had trained wanted to get involved. Mairead Buckley, (nee Crowley) Barra’s mam, a camogie player with Newcestown, was delighted as her club wanted to get involved too. The Football, Hurling & Camogie Family all coming together to help their own.

On Sunday the 28th of June a select group will run a marathon relay around Coachford, Rylane and Aghabullogue. It will start at the club complex in Coachford @10.30 and finish back at the clubhouse a few hours later having circled the parish.

Great care has been taken to ensure that the runners will  comply with all regulations re COVID-19, and we hope that the route, which takes in Coachford, Glashagarriff, Peake, Aghavrin, Aghabullogue, Coolineagh, Mount Rivers, Rylane, The Old Kerry Road, Killeenleigh, Oldcastle, Carrignamuck, Godfreys’ Cross, Fergus and Nadrid before returning to the clubhouse, will be lined with supporters.